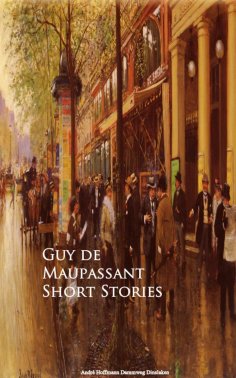 "I entered literary life as a meteor, and I shall leave it like a thunderbolt." These words of Maupassant to Jose Maria de Heredia on the occasion of a memorable meeting are, in spite of their morbid solemnity, not an inexact summing up of the brief career during which, for ten years, the writer, by turns undaunted and sorrowful, with the fertility of a master hand produced poetry, novels, romances and travels, only to sink prematurely into the abyss of madness and death. . . . .

In the month of April, 1880, an article appeared in the "Le Gaulois" announcing the publication of the Soirees de Medan. It was signed by a name as yet unknown: Guy de Maupassant. After a juvenile diatribe against romanticism and a passionate attack on languorous literature, the writer extolled the study of real life, and announced the publication of the new work. It was picturesque and charming. In the quiet of evening, on an island, in the Seine, beneath poplars instead of the Neapolitan cypresses dear to the friends of Boccaccio, amid the continuous murmur of the valley, and no longer to the sound of the Pyrennean streams that murmured a faint accompaniment to the tales of Marguerite's cavaliers, the master and his disciples took turns in narrating some striking or pathetic episode of the war. And the issue, in collaboration, of these tales in one volume, in which the master jostled elbows with his pupils, took on the appearance of a manifesto, the tone of a challenge, or the utterance of a creed.

In fact, however, the beginnings had been much more simple, and they had confined themselves, beneath the trees of Medan, to deciding on a general title for the work. Zola had contributed the manuscript of the "Attaque du Moulin," and it was at Maupassant's house that the five young men gave in their contributions. Each one read his story, Maupassant being the last.