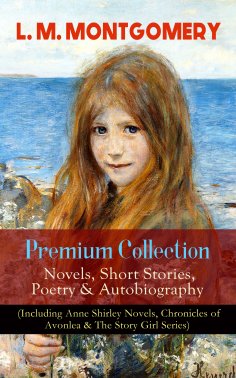 This carefully crafted ebook: "L. M. MONTGOMERY – Premium Collection: Novels, Short Stories, Poetry & Autobiography (Including Anne Shirley Novels, Chronicles of Avonlea & The Story Girl Series)" is formatted for your eReader with a functional and detailed table of contents.
Table of Contents:
Anne of Green Gables Series
Anne of Green Gables
Anne of Avonlea
Anne of the Island
Anne's House of Dreams
Rainbow Valley
Rilla of Ingleside
The Story Girl Series
The Story Girl
The Golden Road
Short Stories
Chronicles of Avonlea
The Hurrying of Ludovic
Old Lady Lloyd
Each in His Own Tongue
Little Joscelyn
The Winning of Lucinda
Old Man Shaw's Girl
Aunt Olivia's Beau
Quarantine at Alexander Abraham's
Pa Sloane's Purchase
The Courting of Prissy Strong
The Miracle at Carmody
The End of a Quarrel
Further Chronicles of Avonlea
Aunt Cynthia's Persian Cat
The Materializing of Cecil
Her Father's Daughter
Jane's Baby
The Dream-Child
The Brother Who Failed
The Return of Hester
The Little Brown Book of Miss Emily
Sara's Way
The Son of his Mother
The Education of Betty
In Her Selfless Mood
The Conscience Case of David Bell
Only a Common Fellow
Tannis of the Flats
Uncollected Short Stories
Other Novels
Kilmeny of the Orchard
Poetry
Autobiography
The Alpine Path: The Story of My Career
Lucy Maud Montgomery (1874-1942) was a Canadian author best known for a series of novels with Anne of Green Gables, an orphaned girl, mistakenly sent to a couple, who had intended to adopt a boy. Anne novels made Montgomery famous in her lifetime and gave her an international following. The first novel was followed by a series of sequels with Anne as the central character. Montgomery went on to publish 20 novels as well as 530 short stories, 500 poems, and 30 essays.