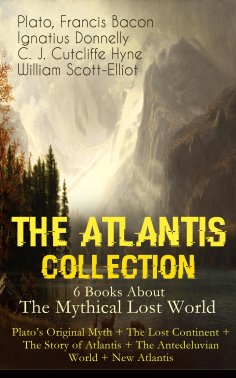 This carefully crafted ebook: “THE ATLANTIS COLLECTION - 6 Books About The Mythical Lost World: Plato's Original Myth + The Lost Continent + The Story of Atlantis + The Antedeluvian World + New Atlantis” is formatted for your eReader with a functional and detailed table of contents:
The Original Myth of Atlantis (Plato)
Timaeus
Critias
New Atlantis (Francis Bacon)
Atlantis: The Antedeluvian World (Ignatius Donnelly)
The Lost Continent (C. J. Cutcliffe Hyne)
The Story of Atlantis (William Scott-Elliot)
Atlantis ("island of Atlas") is a mystical island mentioned within an allegory on the hubris of nations in Plato's works Timaeus and Critias, where it represents the antagonist naval power that besieges "Ancient Athens". Plato's indications of the time of the events—more than 9,000 years before his day, and the alleged location of Atlantis—"beyond the Pillars of Hercules", has led to much scientific speculation. As a consequence, Atlantis has become a byword for any and all supposed advanced prehistoric lost civilizations. At the end of the story, Atlantis eventually falls out of favor with the gods and famously submerges into the Atlantic Ocean. Despite its secondary importance in Plato's work, the Atlantis story has had a considerable impact on literature. The allegorical aspect of Atlantis was taken up in utopian works of several Renaissance writers, such as Francis Bacon's New Atlantis. On the other hand, 19th-century scholars interpreted Plato's account as historical tradition, most notably in Ignatius L. Donnelly's Atlantis: The Antediluvian World. Many of his theories are the source of many modern-day concepts about Atlantis, including these: the civilization and technology beyond its time, the origins of all present races and civilizations, and a civil war between good and evil. Much of Donnelly's scholarship, especially with regard to Atlantis as an explanation for similarities between ancient civilizations of the Old and New Worlds.