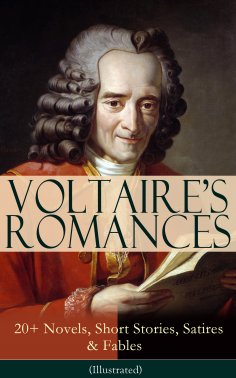 This carefully crafted ebook: "VOLTAIRE'S ROMANCES: 20+ Novels, Short Stories, Satires & Fables (Illustrated)" is formatted for your eReader with a functional and detailed table of contents.
François-Marie Arouet (1694-1778), known by his nom de plume Voltaire, was a French Enlightenment writer, historian, and philosopher famous for his wit, his attacks on the established Catholic Church, and his advocacy of freedom of religion, freedom of expression, and separation of church and state. Voltaire was a versatile writer, producing works in almost every literary form, including plays, poems, novels, essays, and historical and scientific works. He was an outspoken advocate of several liberties, despite the risk this placed him in under the strict censorship laws of the time. As a satirical polemicist, he frequently made use of his works to criticize intolerance, religious dogma, and the French institutions of his day.
Table of Contents:
Candide
Zadig
Micromegas
The Huron
The White Bull
The Man of Forty Crowns
The Princess of Babylon
The Sage and the Atheist
Memnon the Philosopher
The Black and the White
The World as it Goes
Andre des Touches at Siam
Bababec
Jeannot and Colin
The Travels of Scarmentado
A Conversation with a Chinese
Plato's Dream
Pleasure in Having no Pleasure
An Adventure in India
The Good Brahmin
The Two Comforters
Ancient Faith and Fable
The Study of Nature
Dialogue between Marcus Aurelius and a Recollet Friar
Dialogue between a Brahmin and a Jesuit
Dialogues between Lucretius and Posidonius
Dialogue between a Client and His Lawyer
Dialogue between Madame De Maintenon and Mademoiselle De L'Enclos
Dialogue between a Savage and a Bachelor of Arts