ZADIG - The Book of Faith (Illustrated) 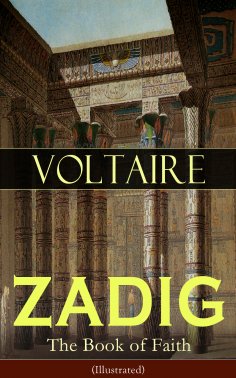 This carefully crafted ebook: "ZADIG - The Book of Faith (Illustrated)" is formatted for your eReader with a functional and detailed table of contents.
Zadig or The Book of Fate is a famous novel and work of philosophical fiction written by Enlightenment philosopher Voltaire. It tells the story of Zadig, a philosopher in ancient Babylonia. Disillusioned with women, Zadig turns to science but his knowledge lands him in prison. Upon his release from prison, Zadig rises in favour with the king and queen of Babylonia and is eventually appointed prime minister, but he is forced to flee the kingdom after his love for queen Astarté is discovered. Having reached Egypt, Zadig kills an Egyptian man while valiantly saving a woman from the attack and this crime means that he must become a slave. After earning his freedom, he begins his journey back to Babylonia in order to discover what has become of Astarté and he is taken captive by a group of Arabs, from whom he learns that king Moabdar has been killed. On his return, the final part of the challenge to be king is taking place. The author does not attempt any historical accuracy, and some of the problems Zadig faces are thinly disguised references to social and political problems of Voltaire's own day. It is philosophical in nature, and presents human life as in the hands of a destiny beyond human control.
François-Marie Arouet (1694-1778), known by his nom de plume Voltaire, was a French Enlightenment writer, historian, and philosopher famous for his wit, his attacks on the established Catholic Church, and his advocacy of freedom of religion, freedom of expression, and separation of church and state. As a satirical polemicist, he frequently made use of his works to criticize intolerance, religious dogma, and the French institutions of his day.