POWER & SUCCESS COLLECTION: The Secret Of Success, The Power Of Concentration, Thought-Force in Busi 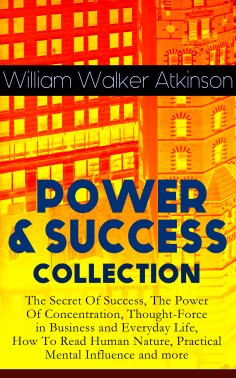 This carefully crafted ebook: "THE ARCANE TEACHINGS - Complete Collection: The Arcane Formulas - Mental Alchemy, The Arcane Teachings & Vril - The Vital Magnetism" is formatted for your eReader with a functional and detailed table of contents.
The Arcane Teaching has come down to the present age through the corridors of time, from the dim ages of past eras, races, and schools of thought. In the Arcane Lessons you will see that the individual is but a Centre of Consciousness and Force in the great Life Principle, Cosmic Will or Spirit. In the Arcane Teaching, the term "Vril" indicates the universal principle of vital-energy, life-force, or vital magnetism, as it is sometimes called. The term itself is believed to have had its origin in the language of ancient Atlantis, tradition holding that the Atlantean root vri, meaning life, is the source of the word Vril, the latter expressing the idea of vital principle or life-energy. The Arcane Teachings Collection contains three books: The Arcane Teachings, The Arcane Formulas; or, Mental Alchemy & Vril; or, Vital Magnetism.
William Walker Atkinson (1862-1932) was a prolific writer. His works treat themes related to the mental world, occultism, divination, psychic reality, and mankind's nature. They constitute a basis for what Atkinson called "New Psychology" or "New Thought".