Little Men: Life at Plumfield with Jo's Boys & A Sequel - Jo's Boys and How They Turned Out (Childre 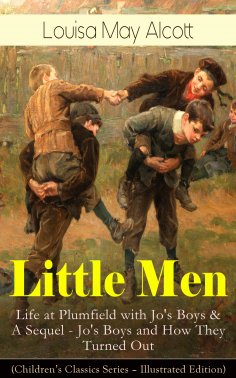 This carefully crafted ebook: "Little Men: Life at Plumfield with Jo's Boys & A Sequel - Jo's Boys and How They Turned Out (Children's Classics Series - Illustrated Edition)" is formatted for your eReader with a functional and detailed table of contents.
Little Men recounts six months in the life of the students at Plumfield, a school run by Professor Friedrich and Mrs. Josephine Bhaer. The story begins with the arrival of Nat Blake, a shy young orphan who used to earn a living playing the violin. We are introduced to the majority of the characters through his eyes. Personal relationships are central to the school, and diversity is celebrated.
Jo's Boys, and How They Turned Out is a sequel to "Little Men". In it, Jo's "children," now grown, are caught up in real world troubles. The book mostly follows the lives of Plumfield boys who were introduced in Little Men, particularly Tommy, Emil, Demi, Nat, Dan, and Professor Bhaer and Jo's sons Rob and Teddy, although the others make frequent appearances as well. The book takes place ten years after Little Men. Dolly and George are college students dealing with the temptations of snobbery, arrogance, self-indulgence and vanity.
Louisa May Alcott (1832-1888) was an American novelist and poet best known as the author of the novel Little Women (1868) and its sequels Little Men (1871) and Jo's Boys (1886). Henry James called her "The novelist of children... the Thackeray, the Trollope, of the nursery and the schoolroom."