Complete Novels of Rudyard Kipling: The Light That Failed + Captain Courageous: A Story of the Grand 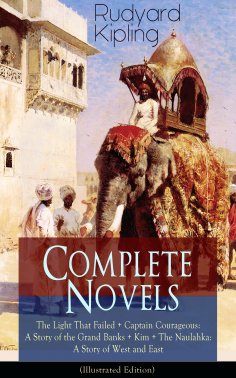 This carefully crafted ebook: "Complete Novels of Rudyard Kipling: The Light That Failed + Captain Courageous: A Story of the Grand Banks + Kim + The Naulahka: A Story of West and East (Illustrated)" is formatted for your eReader with a functional and detailed table of contents.
"Stalky & Co." is a novel about adolescent boys at a British boarding school. Reflecting its origins, the novel is episodic in nature, with self-contained chapters. It is set at an unnamed school referred to as the College or the Coll., which is based on the United Services College in Devon, which Kipling attended. The character Beetle, one of the main trio, is partly based on Kipling himself, while the charismatic character Stalky is based on Lionel Dunsterville, M'Turk is based on George Charles Beresford and Mr King is based on William Carr Crofts.
"Kim" is and adventure novel about the orphaned son of an Irish soldier and a poor Irish mother who have both died in poverty. Living a vagabond existence in India under British rule in the late 19th century, Kim earns his living by begging and running small errands on the streets of Lahore.
"Captains Courageous" follows the adventures of fifteen-year-old Harvey Cheyne Jr., the spoiled son of a railroad tycoon, after he is saved from drowning by a Portuguese fisherman in the north Atlantic.
"The Light That Failed" is a psychological novel. Most of the novel is set in London, but many important events throughout the story occur in Sudan or India. The Light that Failed follows the life of Dick Heldar, a painter who goes blind.
"Naulahka: A Story of East and West", is an adventure novels, the story of a priceless Indian jewel.
Joseph Rudyard Kipling (1865-1936) was an English short-story writer, poet, and novelist. He wrote tales and poems of British soldiers in India and stories for children.