Smithy and Nobby Series: 6 Book Collection with 90+ Stories in One Volume 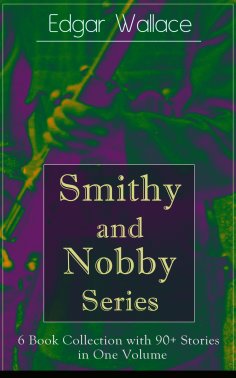 This carefully crafted ebook: "Smithy and Nobby Series: 6 Book Collection with 90+ Stories in One Volume" is formatted for your eReader with a functional and detailed table of contents.
Edgar Wallace (1875 - 1932) was an English writer. As well as journalism, Wallace wrote screen plays, poetry, historical non-fiction, 18 stage plays, 957 short stories and over 170 novels, 12 in 1929 alone. More than 160 films have been made of Wallace's work.
Table of Contents:
Smithy (1905)
Army Reform Opinions of Private Smith (1906)
Smithy Aboard (1909)
Smithy and the Hun (1915)
Nobby or Smithy's Friend Nobby (1916)
Smithy, Nobby & Co. (1904 - 1918)
The New Officer
The Clairvoyant
The Photographer
Bertie
Erudition
Nobby's Part
The Chef
The New Rules
Employing the Soldier
Private Clark's Will
The Faith of Private Simpson
Uncle Joe's Tract
Nobby and His Letters
Jam for the Enemy
Nobby on Getting Commissions…