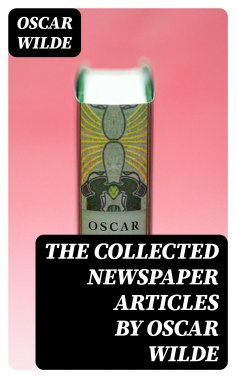 Throughout the 1880s Oscar Wilde devoted a great part of his creative energies to working as a professional journalist and he was prepared to write on a remarkable range of topics. Uniquely witty, intellectually acute, and socially aware Wilde's journalism not only displays the extensive reading and stylistic experimentation that prepared the way for his major works of the 1890s, it provides an essential record of the vibrant and rapidly changing journalistic culture in which he played a major part. This collection includes: A Handbook To Marriage A Ride Through Morocco Aristotle At Afternoon Tea Balzac In English Dinners And Dishes Hamlet At The Lyceum London Models Mr Morris On Tapestry Mr Whistler's Ten O'clock Mrs Langtry As Hester Grazebrook Olivia At The Lyceum The American Invasion Two Biographies Of Keats Two Letters To The Daily Chronicle Woman's Dress Oscar Wilde (1854 - 1900) is a central figure in aesthetic writing. Wilde was a poet, fiction writer, essayist and editor. Oscar Wilde is often seen as a homosexual icon although as many men of his day he was also a husband and father. Wilde's life ended at odds with Victorian morals that surrounded him. He died in exile.