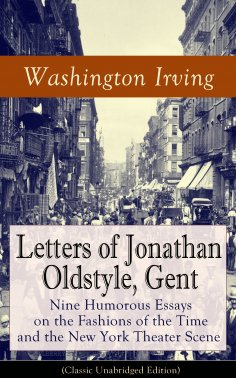 This carefully crafted ebook: "Letters of Jonathan Oldstyle, Gent: Nine Humorous Essays on the Fashions of the Time and the New York Theater Scene (Classic Unabridged Edition)" is formatted for your eReader with a functional and detailed table of contents.
The Letters of Jonathan Oldstyle, Gent. (1802) is a collection of nine observational letters written by American writer Washington Irving under the pseudonym Jonathan Oldstyle. The letters lampoon marriage, manners, dress and culture of early 19th century New York. They are Irving's début in print. Jonathan Oldstyle is the first of many pseudonyms under which Irving wrote during his career and it stands out as a descriptive name for the character of the narrator - an aging bachelor who observes with astonishment the newfangled impulses of youth. The Oldstyle letters were well received in New York and despite the use of the pseudonym, Irving's identity as Oldstyle was not a secret. The public enjoyed them, but Irving would always look back on the letters as "crude and boyish".
Washington Irving (1783-1859) was an American author, essayist, biographer, historian, and diplomat of the early 19th century. He is best known for his short stories "Rip Van Winkle" and "The Legend of Sleepy Hollow" both of which appear in his book The Sketch Book of Geoffrey Crayon, Gent. His historical works include biographies of George Washington and Oliver Goldsmith, and several histories of 15th-century Spain, dealing with subjects such as the Moors and the Alhambra. Irving served as the U.S. ambassador to Spain from 1842 to 1846.