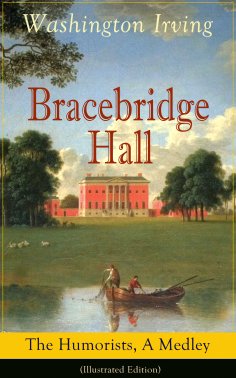 This carefully crafted ebook: "Bracebridge Hall: The Humorists, A Medley (Illustrated Edition)" is formatted for your eReader with a functional and detailed table of contents.
Bracebridge Hall, or The Humorists, A Medley was written by Washington Irving in 1821, while he lived in England. This episodic novel is actually a location-based series of character sketches and short stories and it was originally published under his pseudonym Geoffrey Crayon. The tales revolve around the occupants of an English manor, which was occupied by members of the Bracebridge family and which Irving visited.
Washington Irving (1783-1859) was an American author, essayist, biographer, historian, and diplomat of the early 19th century. He is best known for his short stories "Rip Van Winkle" and "The Legend of Sleepy Hollow" both of which appear in his book The Sketch Book of Geoffrey Crayon, Gent. His historical works include biographies of George Washington and Oliver Goldsmith, and several histories of 15th-century Spain, dealing with subjects such as the Moors and the Alhambra. Irving served as the U.S. ambassador to Spain from 1842 to 1846.
Table of Contents:
The Hall
The Busy Man
Family Servants
The Widow
The Lovers
Family Reliques
An Old Soldier
The Widow's Retinue
Ready-Money Jack
Bachelors
A Literary Antiquary
The Farmhouse
Horsemanship
Love Symptoms
Falconry
Hawking
Fortune-Telling
Love-Charms
A Bachelor's Confessions
Gipsies
Village Worthies
The Schoolmaster
The School
A Village Politician
The Rookery
May-Day
The Culprit
Lover's Troubles
The Wedding
The Stout Gentleman
The Student of Salamanca
Annette Delarbre
Dolph Heyliger