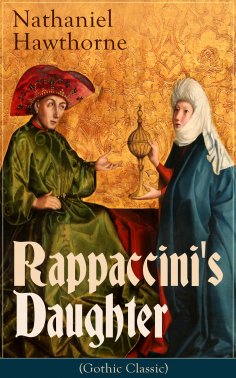 This carefully crafted ebook: "Rappaccini's Daughter (Gothic Classic)" is formatted for your eReader with a functional and detailed table of contents.
Excerpt:
"Does this garden belong to the house?" asked Giovanni. "Heaven forbid, signor, unless it were fruitful of better pot herbs than any that grow there now," answered old Lisabetta. "No; that garden is cultivated by the own hands of Signor Giacomo Rappaccini, the famous doctor, who, I warrant him, has been heard of as far as Naples." (Rappaccini's Daughter)
"Rappaccini's Daughter" is the story of Beatrice, the daughter of Giacomo Rappaccini, who is in turn a medical researcher in medieval Padua and grows a garden of poisonous plants.
American novelist and short story writer Nathaniel Hawthorne's (1804-1864) writing centers on New England, many works featuring moral allegories with a Puritan inspiration. Hawthorne has also written a few poems which many people are not aware of. His works are considered to be part of the Romantic movement and, more specifically, Dark romanticism. His themes often centre on the inherent evil and sin of humanity, and his works often have moral messages and deep psychological complexity.