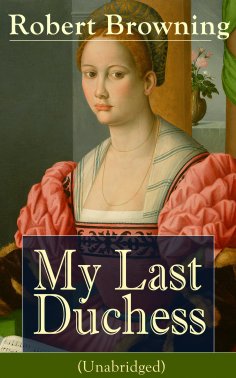 This carefully crafted ebook: "My Last Duchess (Unabridged)" is formatted for your eReader with a functional and detailed table of contents.
"My Last Duchess" is a poem, frequently anthologised as an example of the dramatic monologue. It first appeared in 1842 in Browning's Dramatic Lyrics. The poem is written in 28 rhymed couplets of iambic pentameter. The poem is set during the late Italian Renaissance. The speaker (presumably the Duke of Ferrara) is giving the emissary of the family of his prospective new wife (presumably a third or fourth since Browning could have easily written 'second' but did not do so) a tour of the artworks in his home. He draws a curtain to reveal a painting of a woman, explaining that it is a portrait of his late wife; he invites his guest to sit and look at the painting.
Robert Browning (1812 - 1889) was an English poet and playwright whose mastery of dramatic verse, and in particular the dramatic monologue, made him one of the foremost Victorian poets. His poems are known for their irony, characterization, dark humor, social commentary, historical settings, and challenging vocabulary and syntax. The speakers in his poems are often musicians or painters whose work functions as a metaphor for poetry.