Hard Times: For These Times: Unabridged 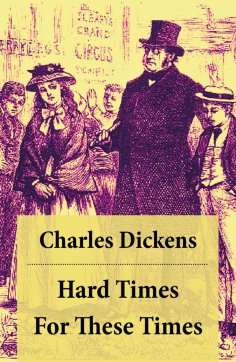 This carefully crafted ebook: "Hard Times: For These Times (Unabridged)" is formatted for your eReader with a functional and detailed table of contents. Hard Times – For These Times (commonly known as Hard Times) is the tenth novel by Charles Dickens, first published in 1854. The book tells the tragic story of Louisa Gradgrind and her father. When Louisa, trapped in a loveless marriage, falls prey to an idle seducer, the crisis forces her father to reconsider his cherished system. Yet even as the development of the story reflects Dickens's growing pessimism about human nature and society, Hard Times marks his return to the theme which had made his early works so popular: the amusements of the people. Charles John Huffam Dickens ( 1812 – 1870) was an English writer and social critic. He created some of the world's most memorable fictional characters and is generally regarded as the greatest novelist of the Victorian period. During his life, his works enjoyed unprecedented fame, and by the twentieth century his literary genius was broadly acknowledged by critics and scholars. His novels and short stories continue to be widely popular.