Sense and Sensibility (with the original watercolor illustrations by C.E. Brock) 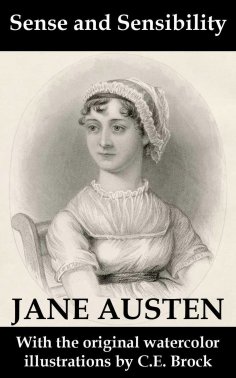 This edition of "Sense and Sensibility" has been carefully formatted for your ebook reader with a functional table of contents and contains all the original watercolor illustrations by C.E. Brock. Sense and Sensibility is a novel by Jane Austen, and was her first published work when it appeared in 1811 under the pseudonym "A Lady". A work of romantic fiction, Sense and Sensibility is set in southwest England between 1792 and 1797, and portrays the life and loves of the Dashwood sisters, Elinor and Marianne. The novel follows the young ladies to their new home, a meagre cottage on a distant relative's property, where they experience love, romance and heartbreak. The philosophical resolution of the novel is ambiguous: the reader must decide whether sense and sensibility have truly merged. Jane Austen (1775 – 1817) was an English novelist whose works of romantic fiction, set among the landed gentry, earned her a place as one of the most widely read writers in English literature. Her realism and biting social commentary have gained her historical importance among scholars and critics.