Anne of Green Gables + Anne of Avonlea + Anne of the Island 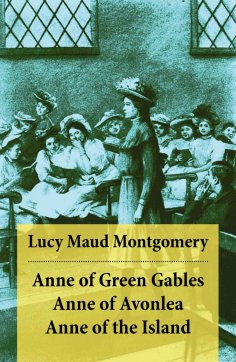 This carefully crafted ebook: "Anne of Green Gables + Anne of Avonlea + Anne of the Island" contains the 3 First Anne Shirley Classics Unabridged books in one volume and is formatted for your eReader with a functional and detailed table of contents. Table of contents : Anne of Green Gables Anne of Avonlea Anne of the Island Anne of Green Gables (1908), a sentimentalized but often charming story of a spirited, unconventional orphan girl who finds a home with an elderly couple, which helped her achieve international success with both adults and children. Anne of Avonlea (1909) follows Anne from the age of 16 to 18, during the two years that she teaches at Avonlea school. Anne of the Island (1915). Anne attends Redmond College in Kingsport, where she is studying for her BA. Lucy Maud Montgomery (1874 – 1942) was a Canadian author with roots in Scotland. She lost her mother at an early age, and was raised by her maternal grandparents. She began to keep a diary and discovered at the age of 10 that she could write poetry. The novels about Anne and Emily are semi-autobiographical and contain many of her own memories from the 1880s and 1890s on Prince Edward Island in Canada. Montgomery went on to publish 20 novels as well as 530 short stories, 500 poems, and 30 essays.