The Woman in White (illustrated) + The Moonstone + The Haunted Hotel: A Mystery of Modern Venice 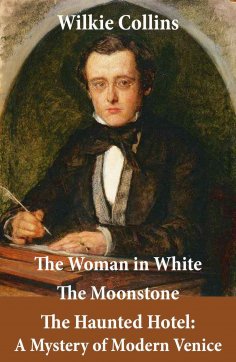 This carefully crafted ebook: "The Woman in White (illustrated) + The Moonstone + The Haunted Hotel: A Mystery of Modern Venice" contains 3 books in one volume and is formatted for your eReader with a functional and detailed table of contents. The Woman in White is an epistolary novel written by Wilkie Collins in 1859, serialized in 1859–1860, and first published in book form in 1860. It is considered to be among the first mystery novels and is widely regarded as one of the first in the genre of 'sensation novels'. The story is sometimes considered an early example of detective fiction with the hero, Walter Hartright, employing many of the sleuthing techniques of later private detectives. The Moonstone (1868) by Wilkie Collins is an epistolary novel, generally considered the first detective novel in the English language. The Moonstone is about the disappearance of a precious diamond called "the Moonstone", and the novel is a collection of eyewitness accounts by different characters who know something about its disappearance. The idea was for the novel itself to be like a collection of evidence so that the readers could be put in the position of the detective. The Haunted Hotel: A Mystery of Modern Venice is a Wilkie Collins's ghost story was set in 1860 and published in book form with 'My Lady's Money'. The Haunted Hotel: a tale of a haunting - or the tale of a crime? The ghost of Lord Montberry seems to be haunting the Palace Hotel in Venice. Montberry's beautiful-yet-terrifying wife, the Countess Narona, and her erstwhile brother are the center of the terror that fills the Palace Hotel. Are their malefactions at the root of the haunting - or is there something darker, something much more unknowable at work? William Wilkie Collins (1824 – 1889) was an English novelist, playwright, and author of short stories. His best-known works are The Woman in White, The Moonstone, Armadale, and No Name.