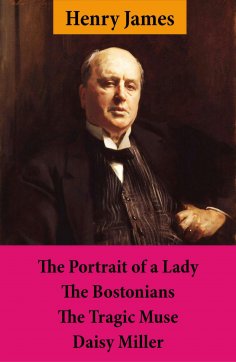 This carefully crafted ebook: "The Portrait of a Lady + The Bostonians + The Tragic Muse + Daisy Miller (4 Unabridged Classics)" is formatted for your eReader with a functional and detailed table of contents. The Portrait of a Lady is a novel by Henry James, first published as a serial in The Atlantic Monthly and Macmillan's Magazine in 1880–81 and then as a book in 1881. It is the story of a spirited young American woman, Isabel Archer, who "affronts her destiny" and finds it overwhelming. She inherits a large amount of money and subsequently becomes the victim of Machiavellian scheming by two American expatriates. Like many of James's novels, it is set in Europe, mostly England and Italy. Generally regarded as the masterpiece of James's early period, this novel reflects James's continuing interest in the differences between the New World and the Old, often to the detriment of the former. It also treats in a profound way the themes of personal freedom, responsibility, and betrayal. The Bostonians by Henry James was first published as a serial in The Century Magazine in 1885–1886 and then as a book in 1886. This bittersweet tragicomedy centers on an odd triangle of characters: Basil Ransom, a political conservative from Mississippi; Olive Chancellor, Ransom's cousin and a Boston feminist; and Verena Tarrant, a pretty, young protégée of Olive's in the feminist movement. The storyline concerns the struggle between Ransom and Olive for Verena's allegiance and affection, though the novel also includes a wide panorama of political activists, newspaper people, and quirky eccentrics.