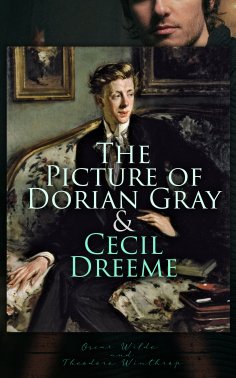 The Picture of Dorian Gray – The novel tells of a young man named Dorian Gray, the subject of a painting by artist Basil Hallward. Dorian is selected for his remarkable physical beauty, and Basil becomes strongly infatuated with Dorian, believing that his beauty is responsible for a new mode of art. The Picture of Dorian Gray is considered one of the last works of classic gothic horror fiction with a strong Faustian theme. It deals with the artistic movement of the decadents, and homosexuality, both of which caused some controversy when the book was first published. However, in modern times, the book has been referred to as "one of the modern classics of Western literature.
Cecil Dreeme – Robert Byng has recently returned from his Grand Tour of Europe to settle in New York City. An old friend lends Byng his rooms at Chrysalis College (an equivalent of real-life New York University, perhaps also partially modelled on the Tenth Street Studio Building). It is there that Byng meets his mysterious and reclusive neighbor Cecil Dreeme, and the two strike up a romantic friendship. However, Byng is also tempted by the villainous Densdeth, who seems to want the protagonist to fall into a life of unspecified sin and debauchery. Published posthumously by the author's friend George William Curtis in 1861, Cecil Dreeme has been called "one of the queerest American novels of the nineteenth century" by scholar Peter Coviello, and it addresses themes of gender and sexuality.

Oscar Wilde (1854–1900) was an Irish poet and playwright. After writing in different forms throughout the 1880s, the early 1890s saw him become one of the most popular playwrights in London. He is best remembered for his epigrams and plays, his novel The Picture of Dorian Gray, and the circumstances of his criminal conviction for gross indecency for consensual homosexual acts in "one of the first celebrity trials", imprisonment, and early death from meningitis at age 46.
Theodore Winthrop (1828–1861) was a writer, lawyer, and world traveller. He was one of the first Union officers killed in the American Civil War. Cecil Dreeme, his most important work, was a semi-autobiographical novel dealing with social mores and gender roles set at New York University, where Winthrop had once been a lodger.