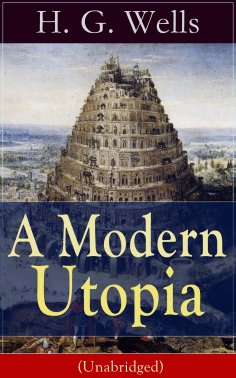 This carefully crafted ebook: "A Modern Utopia (Unabridged)" is formatted for your eReader with a functional and detailed table of contents.
A Modern Utopia is presented as a tale told by a sketchily described character known only as the Owner of the Voice. This character "is not to be taken as the Voice of the ostensible author who fathers these pages," Wells warns. He is accompanied by another character known as "the botanist." Interspersed in the narrative are discursive remarks on various matters, creating what Wells called in his preface "a sort of shot-silk texture between philosophical discussion on the one hand and imaginative narrative on the other." Because of the complexity and sophistication of its narrative structure, H.G. Wells's A Modern Utopia has been called "not so much a modern as a postmodern utopia." The novel is best known for its notion that a voluntary order of nobility known as the Samurai could effectively rule a "kinetic and not static" world state so as to solve "the problem of combining progress with political stability."
Herbert George Wells (1866-1946), known as H. G. Wells, was a prolific English writer in many genres, including the novel, history, politics, and social commentary, and textbooks and rules for war games.