History of the Thirteen: Ferragus, The Duchesse de Langeais & The Girl with the Golden Eyes 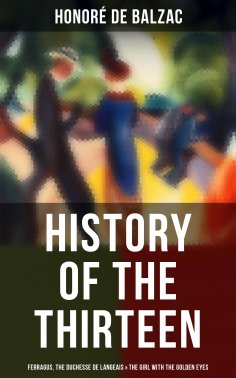 This eBook edition has been formatted to the highest digital standards and adjusted for readability on all devices. History of the Thirteen is a trilogy written by Honoré de Balzac: Ferragus is the first part, the second is La Duchesse de Langeais and the third is The Girl with the Golden Eyes. The story is set around the year 1820. Auguste de Maulincour, a young cavalry officer, walking in a Parisian district of ill repute, sees from afar a young married woman, Clemence, with whom he is secretly in love. In the days that follow his arrival to Paris, Auguste uncovers the secrets of powerful and mysterious people and escapes several assassination attempts.