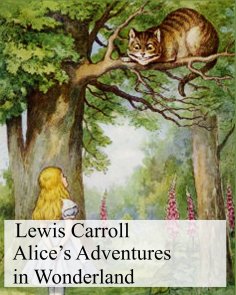 Alice's Adventures in Wonderland (commonly shortened to Alice in Wonderland) is an 1865 novel written by English author Charles Lutwidge Dodgson under the pseudonym Lewis Carroll.

It tells of a young girl named Alice falling through a rabbit hole into a fantasy world populated by peculiar, anthropomorphic creatures.

The tale plays with logic, giving the story lasting popularity with adults as well as with children.
(from wikipedia.org)

Charles Lutwidge Dodgson (1832 - 1898), better known by his pen name Lewis Carroll, was an English writer of world-famous children's fiction, notably Alice's Adventures in Wonderland and its sequel Through the Looking-Glass.

He was noted for his facility at word play, logic, and fantasy. The poems Jabberwocky and The Hunting of the Snark are classified in the genre of literary nonsense. He was also a mathematician, photographer, and Anglican deacon.
(from wikipedia.org)