The Hunting of the Snark (Illustrated Edition) 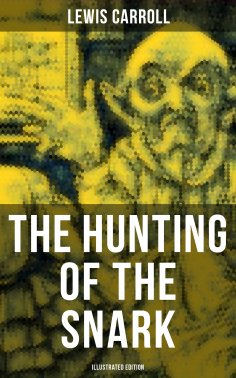 "The Hunting of the Snark" is a nonsense poem written by Lewis Carroll. Written from 1874 to 1876, the poem borrows the setting, some creatures, and eight portmanteau words from Carroll's earlier poem "Jabberwocky" in his children's novel Through the Looking Glass. The plot follows a crew of ten trying to hunt the Snark, an animal which may turn out to be a highly dangerous Boojum; the only one of the crew to find the Snark quickly vanishes, leading the narrator to explain that it was a Boojum after all. Henry Holiday illustrated the poem, and the poem is dedicated to Gertrude Chataway, whom Carroll met as a young girl at the English seaside town Sandown in the Isle of Wight in 1875.
Lewis Carroll was an English writer, mathematician, logician, Anglican deacon and photographer. His most famous writings are Alice's Adventures in Wonderland and its sequel Through the Looking-Glass, as well as the poems "The Hunting of the Snark" and "Jabberwocky", all examples of the genre of literary nonsense. He is noted for his facility at word play, logic, and fantasy.