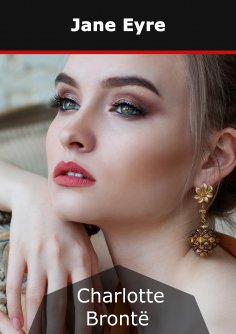 Orphaned as a child, Jane has felt an outcast her whole young life. Her courage is tested once again when she arrives at Thornfield Hall, where she has been hired by the brooding, proud Edward Rochester to care for his ward Adèle. Jane finds herself drawn to his troubled yet kind spirit. She falls in love. Hard.

But there is a terrifying secret inside the gloomy, forbidding Thornfield Hall. Is Rochester hiding from Jane? Will Jane be left heartbroken and exiled once again?

Charlotte Brontë was a British novelist, the eldest out of the three famous Brontë sisters whose novels have become standards of English literature. See also Emily Brontë and Anne Brontë.

Charlotte Brontë was born in Thornton, Yorkshire, England, the third of six children, to Patrick Brontë (formerly "Patrick Brunty"), an Irish Anglican clergyman, and his wife, Maria Branwell. In April 1820 the family moved a few miles to Haworth, a remote town on the Yorkshire moors, where Patrick had been appointed Perpetual Curate. This is where the Brontë children would spend most of their lives. Maria Branwell Brontë died from what was thought to be cancer on 15 September 1821, leaving five daughters and a son to the care of her spinster sister Elizabeth Branwell, who moved to Yorkshire to help the family.

In August 1824 Charlotte, along with her sisters Emily, Maria, and Elizabeth, was sent to the Clergy Daughters' School at Cowan Bridge in Lancashire, a new school for the daughters of poor clergyman (which she would describe as Lowood School in Jane Eyre). The school was a horrific experience for the girls and conditions were appalling. They were regularly deprived of food, beaten by teachers and humiliated for the slightest error. The school was unheated and the pupils slept two to a bed for warmth. Seven pupils died in a typhus epidemic that swept the school and all four of the Brontë girls became very ill - Maria and Elizabeth dying of tuberculosis in 1825. Her experiences at the school deeply affected Brontë - her health never recovered and she immortalised the cruel and brutal treatment in her novel, Jane Eyre. Following the tragedy, their father withdrew his daughters from the school.