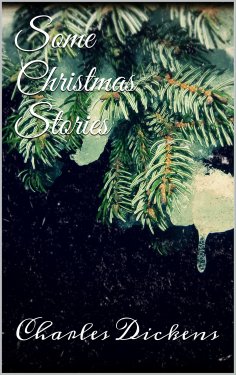 I have been looking on, this evening, at a merry company of children assembled round that pretty German toy, a Christmas Tree. The tree was planted in the middle of a great round table, and towered high above their heads. It was brilliantly lighted by a multitude of little tapers; and everywhere sparkled and glittered with bright objects. There were rosy-cheeked dolls, hiding behind the green leaves; and there were real watches (with movable hands, at least, and an endless capacity of being wound up) dangling from innumerable twigs; there were French-polished tables, chairs, bedsteads, wardrobes, eight-day clocks, and various other articles of domestic furniture (wonderfully made, in tin, at Wolverhampton), perched among the boughs, as if in preparation for some fairy housekeeping; there were jolly, broad-faced little men, much more agreeable in appearance than many real men-and no wonder, for their heads took off, and showed them to be full of sugar-plums; there were fiddles and drums; there were tambourines, books, work-boxes, paint-boxes, sweetmeat-boxes, peep-show boxes, and all kinds of boxes; there were trinkets for the elder girls, far brighter than any grown-up gold and jewels; there were baskets and pincushions in all devices; there were guns, swords, and banners; there were witches standing in enchanted rings of pasteboard, to tell fortunes; there were teetotums, humming-tops, needle-cases, pen-wipers, smelling-bottles, conversation-cards, bouquet-holders; real fruit, made artificially dazzling with gold leaf; imitation apples, pears, and walnuts, crammed with surprises; in short, as a pretty child, before me, delightedly whispered to another pretty child, her bosom friend, "There was everything, and more." This motley collection of odd objects, clustering on the tree like magic fruit, and flashing back the bright looks directed towards it from every side-some of the diamond-eyes admiring it were hardly on a level with the table, and a few were languishing in timid wonder on the bosoms of pretty mothers, aunts, and nurses-made a lively realisation of the fancies of childhood; and set me thinking how all the trees that grow and all the things that come into existence on the earth, have their wild adornments at that well-remembered time.