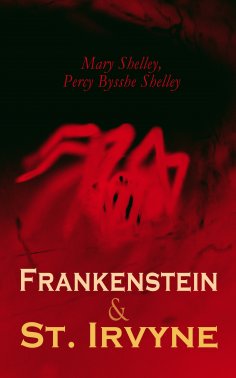 "Frankenstein; or, The Modern Prometheus" tells the story of Victor Frankenstein, a young scientist who creates a grotesque, sapient creature in an unorthodox scientific experiment. Frankenstein is infused with elements of the Gothic novel and the Romantic movement. At the same time, it is an early example of science fiction. It has had a considerable influence in literature and popular culture and spawned a complete genre of horror stories, films and plays.
"St. Irvyne; or, The Rosicrucian" is a Gothic horror novel which retells the destiny of Wolfstein, a solitary wanderer and a disillusioned outcast from society who seeks to kill himself. After he is saved by the monks, he encounters Ginotti, an alchemist of the Rosicrucian, or Rose Cross Order who seeks to impart the secret of immortality.

Mary Wollstonecraft Shelley (1797-1851) was an English novelist, short story writer, dramatist, essayist, biographer, and travel writer, best known for her Gothic novel Frankenstein: or, The Modern Prometheus.
Percy Bysshe Shelley (1792-1822) was one of the major English Romantic poets, and is regarded by some as among the finer lyric and philosophical poets in the English language, and one of the more influential. His early Gothic novels outline his atheistic worldview and touches upon his earliest thoughts on irresponsible self-indulgence and violent revenge.