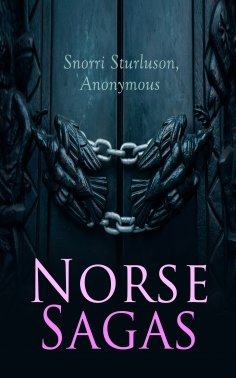 Sagas are stories mostly about ancient Nordic and Germanic history, early Viking voyages, the battles that took place during the voyages and migration to Iceland and of feuds between Icelandic families. They were written in the Old Norse language, mainly in Iceland.
Kings' sagas are of the lives of Scandinavian kings. They were composed in the 12th to 14th centuries.
The Icelanders' sagas, a.k.a. Family Sagas, are stories of real events, passed in oral form till they eventually were recorded, mostly in the 13th century. These are the highest form of the classical Icelandic saga writing.
Legendary Sagas blend remote history with myth or legend. The aim is on a lively narrative and entertainment.
Contents:
Kings' Sagas
Ynglinga Saga
Halfdan the Black Saga
Harald Harfager's Saga
Hakon the Good's Saga
Saga of King Harald Grafeld and of Earl Hakon Son of Sigurd
King Olaf Trygvason's Saga
Saga of Olaf Haraldson (St. Olaf)
Saga of Magnus the Good
Saga of Harald Hardrade
Saga of Olaf Kyrre
Magnus Barefoot's Saga
Saga of Sigurd the Crusader and His Brothers Eystein and Olaf
Saga of Magnus the Blind and of Harald Gille
Saga of Sigurd, Inge, and Eystein, the Sons of Harald
Saga of Hakon Herdebreid
Magnus Erlingson's Saga
Sagas of Icelanders
Egil's Saga (The Story of Egil Skallagrimsson)
Laxdæla Saga
The Saga of Hrafnkell, Frey's Priest
The Story of the Confederates (Bandamanna saga)
The Saga of Gisli the Outlaw
The Saga of Gunnlaug the Worm-Tongue and Raven the Skald
Saga of the Greenlanders
Erik the Red's Saga
Grettir's Saga (The Story of Grettir the Strong)
Njal's Saga (The story of Burnt Njal)
The Saga of Cormac the Skald
The Saga of Howard the Halt
The Saga of the Ere-Dwellers
The Saga of Thrond of Gate
The Saga of Viga-Glum
The Saga of Viglund the Fair
The Saga of Hen-Thorir
Legendary Sagas
Volsunga Saga
Frithiof's Saga

Snorri Sturluson (1179 – 1241) was an Icelandic historian, poet, and politician. He was elected twice as lawspeaker to the Icelandic parliament, the Althing. He was the author of the Prose Edda or Younger Edda, which consists of Gylfaginning, a narrative of Norse mythology, the Skáldskaparmál, a book of poetic language, and the Háttatal, a list of verse forms. He was also the author of the Heimskringla, a history of the Norwegian kings that begins with legendary material in Ynglinga saga and moves through to early medieval Scandinavian history.