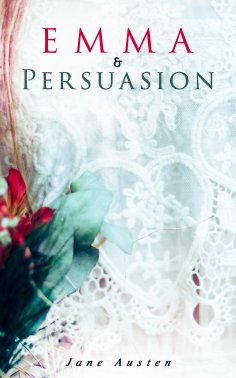 This carefully crafted ebook: "Emma & Persuasion" is formatted for your eReader with a functional and detailed table of contents.
"Emma" – Emma Woodhouse has just attended the wedding of Miss Taylor, her friend and former governess, to Mr. Weston. Having introduced them, Emma takes credit for their marriage, and decides that she likes matchmaking. Against the advice of her brother-in-law, Emma forges ahead with her new interest, causing many controversies in the process. Set in the fictional village of Highbury, Emma is a tale about youthful hubris and the perils of misconstrued romance.
"Persuasion" – Anne Elliot is a young Englishwoman of 27 years, whose family is moving to lower their expenses and get out of debt, at the same time as the wars come to an end, putting sailors on shore. They rent their home to an Admiral and his wife. Brother of Admiral's wife is Navy Captain Frederick Wentworth, a man who had been engaged to Anne when she was 19, and now they meet again, both single and unattached, after no contact in more than seven years. First time the engagement was broken up because Anne's family persuaded her that Frederick wasn't good enough opportunity. The new situation offers a second, well-considered chance at love and marriage for Anne Elliot in her second "bloom".