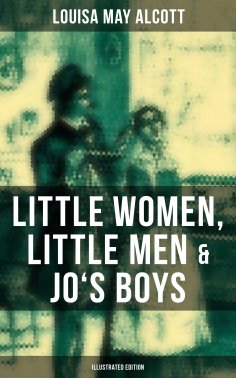 Little Women and Good Wives, published in 1868 and 1869 respectively, is a story following the four March sisters and their friend Theodore "Laurie" Lawrence in Massachusetts in the 1800's. The four girls each exhibit individual flaws and much of the plot is concerned with their journey to correct themselves, always supporting each other in the end despite their numerous squabbles. Margaret "Meg" March is the eldest sister and at the beginning of the tale is very preoccupied with materialistic possessions, Josephine "Jo" March is a tomboy with a fiery temper, Elizabeth "Beth" March is shy and gentle and Amy, being the youngest March sister, is spoilt and therefore prone to temper tantrums. Little Women follows the sisters for about a year, but Good Wives skips forward in time regularly so that by the end they are all of adult age. Little Men, or Life at Plumfield with Jo's Boys is a novel by American author Louisa May Alcott, first published in 1871. Little Men follows the adventures of Jo March and her husband Professor Bhaer as they try to make their school for boys a happy, comfortable, and stimulating place. Jo's Boys was first published in 1886. The novel is the final book in the unofficial Little Women series. In it, Jo's "children," now grown, are caught up in real world troubles.
Louisa May Alcott (1832 – 1888) was an American novelist best known as author of the novel Little Women and its sequels Little Men and Jo's Boys.