The Complete Short Stories of Nathaniel Hawthorne: 120+ Titles in One Edition (Illustrated Edition) 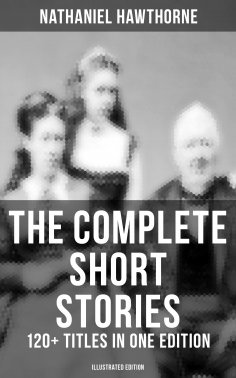 Musaicum Books presents to you this carefully created volume of "The Complete Short Stories of Nathaniel Hawthorne: 120+ Titles in One Edition (Illustrated Edition)". This ebook has been designed and formatted to the highest digital standards and adjusted for readability on all devices.
American novelist and short story writer Nathaniel Hawthorne (1804–1864) published his first work, a novel titled Fanshawe, in 1828; he later tried to suppress it, feeling it was not equal to the standard of his later work. He published several short stories in various periodicals, which he collected in 1837 as Twice-Told Tales. Much of Hawthorne's writing centres on New England, many works featuring moral allegories with a Puritan inspiration. His fiction works are considered to be part of the Romantic movement and, more specifically, Dark romanticism. His themes often centre on the inherent evil and sin of humanity, and his works often have moral messages and deep psychological complexity.
Table of Contents:
Biography of Nathaniel Hawthorne
Collections of Short Stories:
Twice-Told Tales (1837)
Grandfather's Chair (1840)
Biographical Stories Mosses from an Old Manse (1846)
Wonder Book For Girls and Boys (1851)
The Snow Image and Other Twice Told Tales (1852)
Tanglewood Tales For Girls and Boys (1853)
The Dolliver Romance and Other Pieces, Tales and Sketches (1864)
The Story Teller Sketches in Magazines