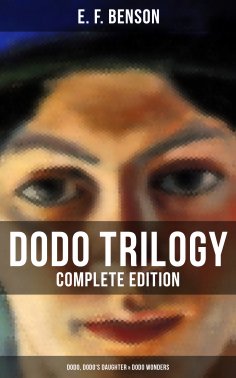 Dodo Trilogy is composed of three novels by E.F. Benson. His very first novel, Dodo: A Detail of the Day (1893), which featured a portrait of the composer and militant suffragette Ethel Smyth (which she "gleefully acknowledged", according to actress Prunella Scales) was back then fashionably controversial and became an instant success. He repeated the success of Dodo, with the same cast of characters a generation later: Dodo the Second (1914), "a unique chronicle of the pre-1914 Bright Young Things" and Dodo Wonders (1921), "a first-hand social history of the Great War in Mayfair and the Shires.
Table of contents:
Dodo; A Detail of the Day
Dodo's Daughter or Dodo the Second
Dodo Wonders
Edward Frederic Benson (1867-1940) was an English novelist, biographer, memoirist, archaeologist and short story writer, known professionally as E.F. Benson. He started his novel writing career in 1893 with the fashionably controversial Dodo, which was an instant success, and followed it with a variety of satire and romantic and supernatural melodrama. He repeated the success of Dodo, with sequels to this novel, but the greatest success came relatively late in his career with The Mapp and Lucia series consisting of six novels and two short stories. The novels feature humorous incidents in the lives of (mainly) upper-middle-class British people in the 1920s and 1930s, vying for social prestige and one-upmanship in an atmosphere of extreme cultural snobbery. Benson was also known as a writer of atmospheric, oblique, and at times humorous or satirical ghost stories.