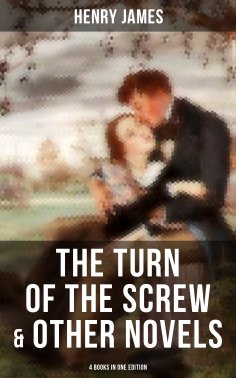 The Wings of the Dove is a 1902 novel by Henry James. This novel tells the story of Milly Theale, an American heiress stricken with a serious disease, and her effect on the people around her. Some of these people befriend Milly with honorable motives, while others are more self-interested. The Ambassadors is a 1903 novel by Henry James, originally published as a serial in the North American Review (NAR). This dark comedy, one of the masterpieces of James's final period, follows the trip of protagonist Lewis Lambert Strether to Europe in pursuit of Chad, his widowed fiancée's supposedly wayward son; he is to bring the young man back to the family business, but he encounters unexpected complications. The third-person narrative is told exclusively from Strether's point of view. What Maisie Knew is a novel by Henry James, first published as a serial in the Chap-Book and in the New Review in 1897 and then as a book later that year. The story of the sensitive daughter of divorced, irresponsible parents, What Maisie Knew has great contemporary relevance as an unflinching account of a wildly dysfunctional family. The book is also a masterly technical achievement by James, as it follows the title character from earliest childhood to precocious maturity. The Turn of the Screw, originally published in 1898, is a ghost story novella written by Henry James. Due to its ambiguous content, it became a favourite text of academics who subscribe to New Criticism.
Henry James ( 1843 – 1916) was an American-born British writer, regarded as one of the key figures of 19th-century literary realism. He was the son of Henry James, Sr. and the brother of philosopher and psychologist William James and diarist Alice James.