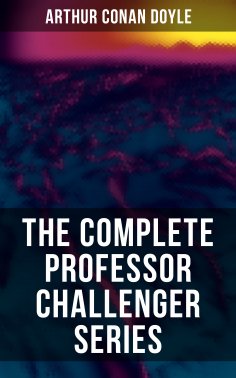 This carefully edited collection has been designed and formatted to the highest digital standards and adjusted for readability on all devices.
George Edward Challenger, better known as Professor Challenger, is a protagonist in a series of fantasy and science fiction novels and stories by Sir Arthur Conan Doyle. Professor Challenger is an aggressive, hot-tempered, dominating figure, and also a pretentious and self-righteous scientific jack-of-all-trades.
The Challenger Series includes:
"The Lost World" describes an expedition to a plateau in South America where prehistoric creatures including dinosaurs still survive.
"The Poison Belt" depicts the situation in which the Earth passes through a cloud of poisonous ether.
"The Land of Mist" is a tale of the supernatural, focusing on Edward Malone's at first professional, and later personal interest in Spiritualism.
"When the World Screamed" tells of Challenger's World Echinus theory.
"The Disintegration Machine" concerns the potentially dangerous new invention by a scientist named Theodore Nemor.
Memories and Adventures: An Autobiography of Arthur Conan Doyle
Arthur Conan Doyle (1859-1930) was a British writer best known for his detective fiction featuring the character Sherlock Holmes. The Sherlock Holmes stories are generally considered milestones in the field of crime fiction. Doyle is also known for writing the fictional adventures of Professor Challenger and for propagating the mystery of the Mary Celeste. He was a prolific writer whose other works include fantasy and science fiction stories, plays, romances, poetry, non-fiction and historical novels.