The Small House at Allington (The Classic Unabridged Edition) 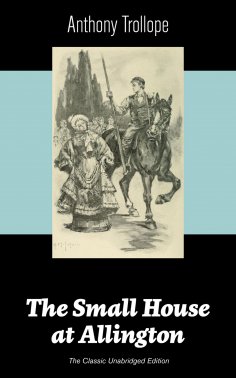 This carefully crafted ebook: "The Small House at Allington" is formatted for your eReader with a functional and detailed table of contents. The Small House at Allington is the fifth novel in Anthony Trollope's series known as the "Chronicles of Barsetshire". It enjoyed a revival in popularity in the early 1990s when the British prime minister, John Major, declared it as his favourite book. The Small House at Allington concerns the Dale family, who live in the "Small House", a dower house intended for the widowed mother (Dowager) of the owner of the estate. The landowner, in this instance, is the bachelor Squire of Allington, Christopher Dale. Dale's mother having died, he has allocated the Small House, rent free, to his widowed sister-in-law and her daughters Isabella ("Bell") and Lilian ("Lily"). Lily has for a long time been secretly loved by John Eames, a junior clerk at the Income Tax Office, while Bell is in love with the local doctor, James Crofts. The handsome and personable, somewhat mercenary Adolphus Crosbie is introduced into the circle by the squire's nephew, Bernard Dale… Anthony Trollope (1815-1882) was one of the most successful, prolific and respected English novelists of the Victorian era. Some of his best-loved works, collectively known as the Chronicles of Barsetshire, revolve around the imaginary county of Barsetshire. He also wrote perceptive novels on political, social, and gender issues, and on other topical matters. Trollope's literary reputation dipped somewhat during the last years of his life, but he regained the esteem of critics by the mid-twentieth century.