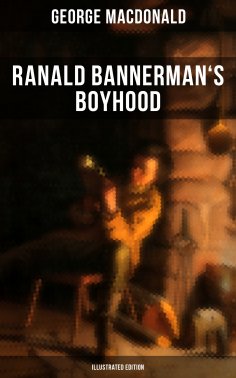 Ranald Bannerman's Boyhood is a realistic, largely autobiographical, novel by George MacDonald. It is a story of a young motherless boy growing up with his brothers in a Scottish manse. Throughout the twists and turns of his escapades and adventures, Ranald learns from his father the important lessons of courage and integrity. He meets plenty of colorful characters such as the wicked sneaking, housekeeper, Mrs. Mitchel, Kirsty, an enchanting Highland storyteller, Turkey, the intrepid cowherd, the strange Wandering Willie, the evil Kelpie, the sweet horse Missie, and the lovely Elsie Duff.

George MacDonald (1824-1905) was a Scottish author, poet, and Christian minister. He was a pioneering figure in the field of fantasy literature and the mentor of fellow writer Lewis Carroll. His writings have been cited as a major literary influence by many notable authors including W. H. Auden, C. S. Lewis, J. R. R. Tolkien, Walter de la Mare, E. Nesbit and Madeleine L'Engle. G. K. Chesterton cited The Princess and the Goblin as a book that had "made a difference to my whole existence".