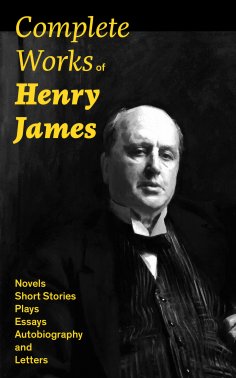 This carefully crafted ebook: "Complete Works of Henry James: Novels, Short Stories, Plays, Essays, Autobiography and Letters" is formatted for your eReader with a functional and detailed table of contents. Henry James (1843–1916) was an American-British writer who spent most of his writing career in Britain. He is regarded as one of the key figures of 19th-century literary realism. Table of Contents: Autobiographies: A Small Boy and Others Notes of a Son and Brother The Middle Years Novels: Confidence Roderick Hudson The Ambassadors The American The Awkward Age The Bostonians The Europeans The Golden Bowl The Other House The Outcry The Portrait of a Lady The Princess Casamassima The Reverberator The Sacred Fount The Spoils of Poynton The Tragic Muse The Whole Family The Wings of the Dove Washington Square Watch and Ward What Maisie Knew The Ivory Tower (Unfinished) Novellas and Short Stories Plays: A Change of Heart Daisy Miller Disengaged Guy Domville Pyramus and Thisbe Still Waters Summersoft Tenants The Album The High Bid The Outcry The Reprobate Essays and Studies: Essays in London and Elsewhere French Novelists and Poets Hawthorne Notes and Reviews Notes on Novelists Partial Portraits Picture and Text Portraits of Places The Art of the Novel Views and Reviews William Wetmore Story and His Friends Within the Rim and Other Essays Collected Travel Sketches: A Little Tour in France English Hours Italian Hours The American Scene Transatlantic Sketches Collected Letters Collected Works about Henry James: An Extract from 'The Decay of Lying' by Oscar Wilde Henry James — An Appreciation by Joseph Conrad Henry James, Jr by William Dean Howells Other Essays: Henry James by Virginia Woolf Underwoods: Poems Addressed to Henry James by Robert Louis Stevenson Memoirs and Portraits: An Essay and Letter by Robert Louis Stevenson