The House of the Dead & Notes from Underground 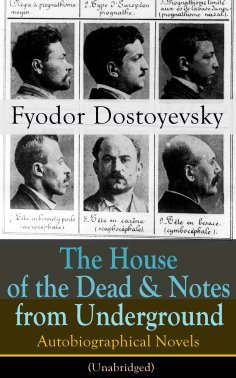 This carefully crafted ebook: "The House of the Dead & Notes from Underground: Autobiographical Novels of Fyodor Dostoyevsky (Unabridged)" is formatted for your eReader with a functional and detailed table of contents. The House of the Dead is a semi-autobiographical novel, which portrays the life of convicts in a Siberian prison camp. The novel has also been published under the titles Memoirs from the House of The Dead and Notes from the Dead House (or Notes from a Dead House). The book is a loosely-knit collection of facts, events and philosophical discussion organized by "theme" rather than as a continuous story. Dostoyevsky himself spent four years in exile in such a camp following his conviction for involvement in the Petrashevsky Circle. This experience allowed him to describe with great authenticity the conditions of prison life and the characters of the convicts. Notes from Underground presents itself as an excerpt from the rambling memoirs of a bitter, isolated, unnamed narrator (generally referred to by critics as the Underground Man) who is a retired civil servant living in St. Petersburg. The first part of the story is told in monologue form, or the underground man's diary, and attacks emerging Western philosophy, especially Nikolay Chernyshevsky's What Is to Be Done? The second part of the book is called "Apropos of the Wet Snow", and describes certain events that, it seems, are destroying and sometimes renewing the underground man, who acts as a first person, unreliable narrator. It is considered by many to be the first existentialist novel. Fyodor Dostoyevsky (1821–1881) was a Russian novelist, short story writer, essayist, journalist and philosopher. His literary works explore human psychology in the troubled political, social, and spiritual atmosphere of 19th-century Russia. Many literary critics rate him as one of the greatest and most prominent psychologists in world literature.