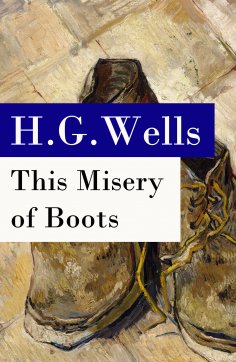 This carefully crafted ebook: "This Misery of Boots (or Socialism Means Revolution) - The original unabridged edition" is formatted for your eReader with a functional and detailed table of contents. This Misery of Boots is a non-fiction essay originally written by H. G. Wells in 1905. The book is a condemnation of economic practices of the time and an impassioned plea in support of Socialism. Table of contents : Chapter I. The World As Boots And Superstructure Chapter II. People Whose Boots Don't Hurt Them Chapter III. At This Point A Dispute Arises Chapter IV. Is Socialism Possible? Chapter V. Socialism Means Revolution Herbert George "H. G." Wells (1866 – 1946) was an English writer, now best known for his work in the science fiction genre. He was also a prolific writer in many other genres, including contemporary novels, history, politics and social commentary, even writing textbooks and rules for war games. Wells was now considered to be one of the world's most important political thinkers and during the 1920s and 30s he was in great demand as a contributor to newspapers and journals.