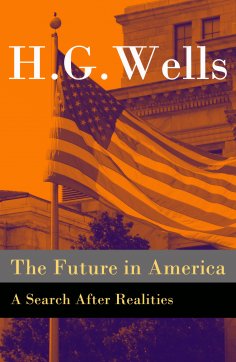 This carefully crafted ebook: "The Future in America - A Search After Realities (The original unabridged and illustrated edition)" is formatted for your eReader with a functional and detailed table of contents. The Future in America -A Search After Realities is a 1906 travel essay by H. G. Wells recounting his impressions from the first of half a dozen visits he would make to the United States. Table of contents: Chapter I. The Prophetic Habit Of Mind Chapter II. Material Progress Chapter III. New York Chapter IV. Growth Invincible Chapter V. The Economic Process Chapter VI. Some Aspects Of American Wealth Chapter VII. Certain Workers Chapter VIII. Corruption Chapter IX. The Immigrant Chapter X. State-Blindness Chapter XI. Two Studies In Disappointment Chapter XII. The Tragedy Of Color Chapter XIII. The Mind Of A Modern State Chapter XIV. Culture Chapter XV. At Washington The Envoy Herbert George "H. G." Wells (1866 – 1946) was an English writer, now best known for his work in the science fiction genre. He was also a prolific writer in many other genres, including contemporary novels, history, politics and social commentary, even writing textbooks and rules for war games. Wells was now considered to be one of the world's most important political thinkers and during the 1920s and 30s he was in great demand as a contributor to newspapers and journals.