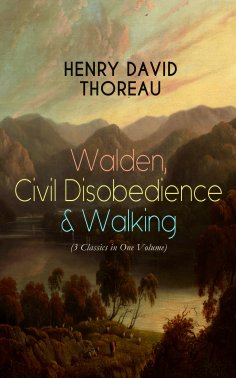 This carefully crafted ebook: "Walden, Civil Disobedience & Walking (3 Classics in One Volume)" is formatted for your eReader with a functional and detailed table of contents.
Walden details Thoreau's experiences over the course of two years, two months, and two days in a cabin he built in the woods near Walden Pond, Massachusetts. Thoreau compresses the time into a single calendar year and uses passages of four seasons to symbolize human development. Part memoir, part personal quest, the book is a reflection upon simple living in natural surroundings, where Thoreau hoped to gain a more objective understanding of society through personal introspection.
Civil Disobedience or Resistance to Civil Government is an essay by Thoreau in which he argues that individuals should not permit governments to overrule or atrophy their consciences, and that they have a duty to avoid allowing such acquiescence to enable the government to make them the agents of injustice.
Walking is a transcendental essay in which Thoreau talks about the importance of nature to mankind, and how people cannot survive without nature, physically, mentally, and spiritually, yet we seem to be spending more and more time entrenched by society. For Thoreau walking is a self-reflective spiritual act that occurs only when you are away from society, that allows you to learn about who you are, and find other aspects of yourself that have been chipped away by society.
Content:
Books
Walden (Life in the Woods)
Civil Disobedience
Walking
Biography
Thoreau by Ralph Waldo Emerson
Henry David Thoreau (1817-1862) was an American essayist, poet, philosopher, abolitionist, naturalist, surveyor, and historian. A leading transcendentalist, Thoreau is best known for his book Walden, a reflection upon simple living in natural surroundings, and his essay Civil Disobedience, an argument for disobedience to an unjust state.