AYESHA SERIES – Complete Collection: She (A History of Adventure) + Ayesha (The Return of She) + She 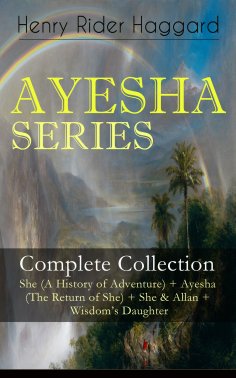 This carefully crafted ebook: "AYESHA SERIES – Complete Collection: She (A History of Adventure) + Ayesha (The Return of She) + She & Allan + Wisdom's Daughter" is formatted for your eReader with a functional and detailed table of contents:
"She" is one of the classics of imaginative literature, and one of the best-selling books of all time. She was extraordinarily popular upon its release and has never been out of print. The story is a first-person narrative that follows the journey of Horace Holly and his ward Leo Vincey to a lost kingdom in the African interior. There they encounter a primitive race of natives and a mysterious white queen named Ayesha who reigns as the all-powerful "She", or "She-who-must-be-obeyed". In this work, Rider Haggard developed the conventions of the Lost World subgenre, which many later authors emulated.
"Ayesha, the Return of She" is a gothic-fantasy novel, a sequel to his far more popular and well known novel, She.
"She and Allan" is a novel, in which Haggard brought together his two most popular characters, Ayesha from She (to which it serves as a prequel), and Allan Quatermain from King Solomon's Mines.
Wisdom's Daughter is the final book in the Ayesha series.
Sir Henry Rider Haggard (1856-1925) was an English writer of adventure novels set in exotic locations, predominantly Africa, and a pioneer of the Lost World literary genre. His stories, situated at the lighter end of Victorian literature, continue to be popular and influential. His novels portray many of the stereotypes associated with colonialism, yet they are unusual for the degree of sympathy with which the native populations are portrayed.