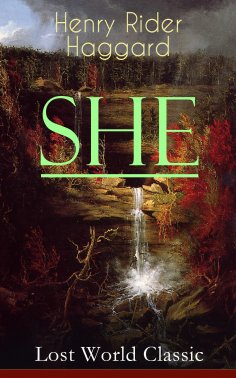 This carefully crafted ebook: "SHE (Lost World Classic)" is formatted for your eReader with a functional and detailed table of contents.
She - A History of Adventure is a classic of imaginative literature and one of the best-selling books of all time. "She" was extraordinarily popular upon its release and has never been out of print. The story is a first-person narrative that follows the journey of Horace Holly and his ward Leo Vincey to a lost kingdom in the African interior. There they encounter a primitive race of natives and a mysterious white queen named Ayesha who reigns as the all-powerful "She", or "She-who-must-be-obeyed". In this work, Rider Haggard developed the conventions of the Lost World subgenre, which many later authors emulated.
Sir Henry Rider Haggard (1856-1925) was an English writer of adventure novels set in exotic locations, predominantly Africa, and a pioneer of the Lost World literary genre.