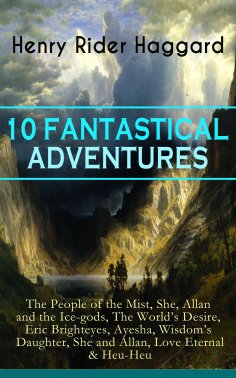 This carefully crafted ebook: "10 FANTASTICAL ADVENTURES: The People of the Mist, She, Allan and the Ice-gods, The World's Desire, Eric Brighteyes, Ayesha, Wisdom's Daughter, She and Allan, Love Eternal & Heu-Heu" is formatted for your eReader with a functional and detailed table of contents.
"She" is one of the classics of imaginative literature, and one of the best-selling books of all time. She was extraordinarily popular upon its release and has never been out of print. The story is a first-person narrative that follows the journey of Horace Holly and his ward Leo Vincey to a lost kingdom in the African interior. There they encounter a primitive race of natives and a mysterious white queen named Ayesha who reigns as the all-powerful "She", or "She-who-must-be-obeyed". In this work, Rider Haggard developed the conventions of the Lost World subgenre, which many later authors emulated.
"Ayesha, the Return of She" is a gothic-fantasy novel, a sequel to his far more popular and well known novel, She.
"The People of the Mist" is the tale of a British adventurer seeking wealth in the wilds of Africa, finding romance, and discovering a lost race and its monstrous god.
"Allan and the Ice-Gods" featurs the famous character Allan Quartermain, and it is based on an idea given to Haggard by Rudyard Kipling. The story details Quartermain's past life regression to a stone-age ancestor and the various adventures involved.
"She and Allan" is a novel, in which Haggard brought together his two most popular characters, Ayesha from She (to which it serves as a prequel), and Allan Quatermain from King Solomon's Mines.
Table of Contents:
She: A History of Adventure
The World's Desire
Eric Brighteyes
The People of the Mist
Ayesha
Wisdom's Daughter
Heu-Heu
Allan and the Ice-gods
Love Eternal
She and Allan
Sir Henry Rider Haggard (1856-1925) was an English writer of adventure novels set in exotic locations, predominantly Africa, and a pioneer of the Lost World literary genre.