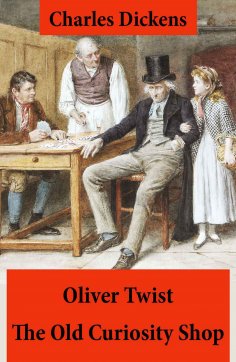 This carefully crafted ebook: "Oliver Twist + The Old Curiosity Shop (2 Unabridged Classics, Illustrated)" is formatted for your eReader with a functional and detailed table of contents. Oliver Twist, subtitled The Parish Boy's Progress, is the second novel by Charles Dickens, published by in 1838. The story is about an orphan, Oliver Twist, who endures a miserable existence in a workhouse and then is placed with an undertaker. He escapes and travels to London where he meets the Artful Dodger, leader of a gang of juvenile pickpockets. Naïvely unaware of their unlawful activities, Oliver is led to the lair of their elderly criminal trainer Fagin. The Old Curiosity Shop is a novel by Charles Dickens, published in 1841. The plot follows the plight of a homeless thirteen year-old girl, Nell Trent, and her aged Grandfather, as they wander the countryside of England, keeping one step ahead of their horrible dwarf nemesis, Daniel Quilp. Charles John Huffam Dickens ( 1812 – 1870) was an English writer and social critic. He created some of the world's most memorable fictional characters and is generally regarded as the greatest novelist of the Victorian period. During his life, his works enjoyed unprecedented fame, and by the twentieth century his literary genius was broadly acknowledged by critics and scholars. His novels and short stories continue to be widely popular.