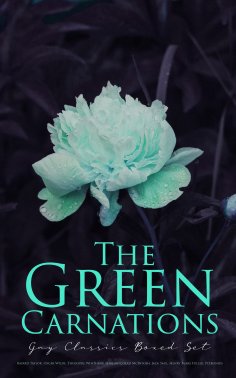 Green Carnation was a symbol of homosexuality and was worn by the famous author Oscar Wilde. Today the flower has come to be associated with gay love and acceptance all over the world. The present collection celebrates Wilde and other authors from the past who celebrated and represented gay love in their novels:
The Picture of Dorian Gray
Joseph and His Friend
Bertram Cope's Year
Cecil Dreeme
This Finer Shadow
The Satyricon
The Sins of the Cities of the Plain

Oscar Wilde (1854–1900) was an Irish poet and playwright. He is best remembered for his epigrams and plays, his novel The Picture of Dorian Gray, and the circumstances of his criminal conviction for gross indecency for consensual homosexual acts.
Theodore Winthrop (1828–1861) was a writer, lawyer, and world traveller. He was one of the first Union officers killed in the American Civil War.
Harlan Cozad McIntosh (1908-1940) was a gay author.
Jack Saul (1857-1904) was a notorious male prostitute in Ireland who was involved in various controversies.
Henry Blake Fuller (1857–1929) was a United States novelist and short story writer. He was perhaps the earliest established American author to explore homosexuality in fiction.
Bayard Taylor (1825-1878) was the author of first American gay novel.
Petronius was a Roman courtier during the reign of Nero.