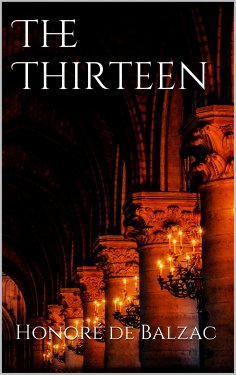 In the Paris of the Empire there were found Thirteen men equally impressed with the same idea, equally endowed with energy enough to keep them true to it, while among themselves they were loyal enough to keep faith even when their interests seemed to clash. They were strong enough to set themselves above all laws; bold enough to shrink from no enterprise; and lucky enough to succeed in nearly everything that they undertook. So profoundly politic were they, that they could dissemble the tie which bound them together. They ran the greatest risks, and kept their failures to themselves. Fear never entered into their calculations; not one of them had trembled before princes, before the executioner's axe, before innocence. They had taken each other as they were, regardless of social prejudices. Criminals they doubtless were, yet none the less were they all remarkable for some one of the virtues which go to the making of great men, and their numbers were filled up only from among picked recruits. Finally, that nothing should be lacking to complete the dark, mysterious romance of their history, nobody to this day knows who they were. The Thirteen once realized all the wildest ideas conjured up by tales of the occult powers of a Manfred, a Faust, or a Melmoth; and today the band is broken up or, at any rate, dispersed. Its members have quietly returned beneath the yoke of the Civil Code; much as Morgan, the Achilles of piracy, gave up buccaneering to be a peaceable planter; and, untroubled by qualms of conscience, sat himself down by the fireside to dispose of blood-stained booty acquired by the red light of blazing towns.