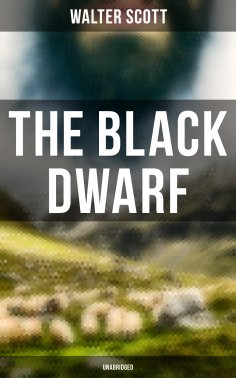 This eBook edition of "The Black Dwarf" has been formatted to the highest digital standards and adjusted for readability on all devices.
As Hobbie Elliot and Patrick Earnscliff went across the Liddesdale hills of the Scottish Borders, going to Hobbies home, the moon suddenly revealed the figure of a human dwarf, who, on being spoken to, refused their offers of assistance. Next morning Hobbie and Earnscliff went to confront the strange being by daylight; and having helped him in collecting stones for constructing a hut, they supplied him with food and other necessaries. In a short time he had completed his dwelling, and became known to the neighbors as Elshender the Recluse. From that point on, Elshie, a loner goat shepherd, regarded by the locals as being in league with the Devil becomes embroiled in a complex tale of love, revenge, betrayal, Jacobite schemes and a threatened forced marriage.