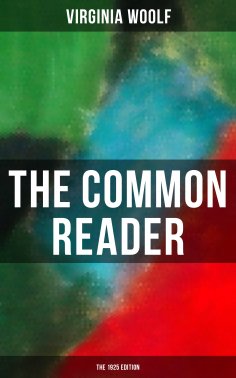 The Common Reader' is a collection of essays by Virginia Woolf, published in two series, the first in 1925 and the second in 1932. The title indicates Woolf's intention that her essays be read by the educated but non-scholarly "common reader," who examines books for personal enjoyment. Woolf outlines her literary philosophy in the introductory essay to the first series, "The Common Reader," and in the concluding essay to the second series, "How Should One Read a Book?" The first series includes essays on Geoffrey Chaucer, Michel de Montaigne, Jane Austen, George Eliot, and Joseph Conrad, as well as discussions of the Greek language and the modern essay. The second series features essays on John Donne, Daniel Defoe, Dorothy Osborne, Mary Wollstonecraft, and Thomas Hardy, among others. Table of Contents: • Chapter 1 -- The Common Reader • Chapter 2 -- The Pastons and Chaucer • Chapter 3 -- On Not Knowing Greek • Chapter 4 -- The Elizabethan Lumber Room • Chapter 5 -- Notes on an Elizabethan Play • Chapter 6 -- Montaigne • Chapter 7 -- The Duchess of Newcastle • Chapter 8 -- Rambling Round Evelyn • Chapter 9 -- Defoe • Chapter 10 -- Addison • Chapter 11 -- The Lives of the Obscure • Chapter 12 -- Jane Austen • Chapter 13 -- Modern Fiction • Chapter 14 -- "Jane Eyre" and "Wuthering Heights" • Chapter 15 -- George Eliot • Chapter 16 -- The Russian Point of View • Chapter 17 -- Outlines • Chapter 18 -- The Patron and the Crocus • Chapter 19 -- The Modern Essay • Chapter 20 -- Joseph Conrad • Chapter 21 -- How it Strikes a Contemporary
Adeline Virginia Woolf (25 January 1882 – 28 March 1941) was an English writer who is considered one of the foremost modernists of the twentieth century and a pioneer in the use of stream of consciousness as a narrative device.