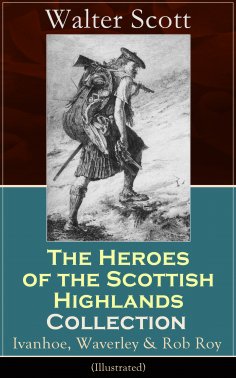 This carefully crafted ebook: "The Heroes of the Scottish Highlands Collection: Ivanhoe, Waverley & Rob Roy (Illustrated)" is formatted for your eReader with a functional and detailed table of contents. Ivanhoe is the story of one of the remaining Saxon noble families at a time when the nobility in England was overwhelmingly Norman. It follows the Saxon protagonist, Wilfred of Ivanhoe, who is out of favour with his father for his allegiance to the Norman king, Richard I. The story is set in 1194, after the failure of the Third Crusade, when many of the Crusaders were still returning to their homes in Europe. Rob Roy is a historical novel narrated by Frank Osbaldistone, the son of an English merchant. He travels first to the North of England, and subsequently to the Scottish Highlands, to collect a debt stolen from his father. On the way he encounters the larger-than-life title character, Rob Roy MacGregor. Though Rob Roy is not the lead character, his personality and actions are key to the novel's development. Waverley is set in the time of the Jacobite uprising of 1745 which sought to restore the Stuart dynasty in the person of Charles Edward Stuart, known as "Bonnie Prince Charlie". A young English dreamer and soldier, Edward Waverley, is sent to Scotland that year. He journeys north from his aristocratic family home, Waverley-Honour, in the south of England, first to the Scottish Lowlands and the home of family friend Baron Bradwardine, then into the Highlands and the heart of the rebellion and its aftermath. Sir Walter Scott (1771–1832) was a Scottish historical novelist, playwright and poet. He was the first modern English-language author to have a truly international career in his lifetime, with many contemporary readers in Europe, Australia, and North America.